Is it safe to let my child play Pokemon Go?

You need to think through the safety issues around multiplayer (MMO) games. There are risks which we'll discuss here, and ways to minimise them.
 Video
 Article
 Forum 23
 Experts
 Products 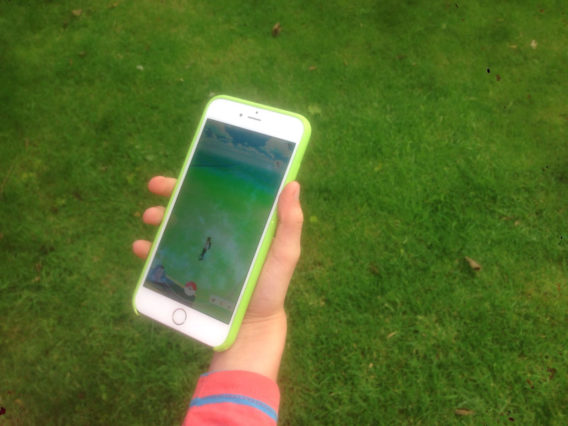 In Short
 Pokémon Go is an augmented reality game that requires players to walk around the local area to play and collect Pokemon and Pokeballs (that you need to collect Pokemon).

 The NSPCC and other child protection charities have issued warning to parents about the potential dangers to children playing the game.

 Use your own phone and email to set up the account.

 Go out walking with your children when they play.

Pokémon Go is a new augmented reality game that children and teenagers can play on their smartphone or tablet. It differs from other video games in that players interact with the real world by looking for Pokémon in their local vicinity. The Pokémon Go map is like Google maps but overlaid on the geographical locations are Pokestops where you can collect Pokeballs, Pokegyms where you can have Pokemon matches with the Pokemon you have collected. Along the way, you will find Pokémons, which you collect by throwing the Pokeballs at the actual Pokémon on your screen. If you catch the Pokémon, it is then added to the Pokedex where you can see the entry about the characteristics of the Pokémon.

The NSPCC, a child protection charity in the UK, contacted Pokémon because they were concerned about child safety issues around playing the game.

1. The game can be used by paedophiles to look for lone children. One of the local Pokestops in my town is a public toilets in the middle of a quiet common. It doesn’t take much imagination to think that a determined opportunistic paedophile could wait in these locations for lone children going to poker stops to collect paper balls or make contact with them to tell them that there is an amazing Pokemon nearby. It is also very easy to spot other players and so makes it easier for a stranger to open a conversation with your child and sexual predators will make use of this fact.

2. In order to walk safely around your locality, you need to look where you are going and not be sidetracked especially when you’re crossing roads.

3. Children may go to places, e.g., bus depots that have free WIFI but these areas are not safe to walk around as there are large vehicles.

4. Teenagers and even adults will attempt to play the game while driving.

5. The Pokemon often appear in dangerous places, e.g., on roads and near rail tracks or in locations that require potentially dangerous climbing. Children are less good at assessing risk if they are motivated to catch a rare Pokemon.

6. Children will sneak out of the house at night time to collect Pokemon – my friend’s son did this, and she found in roaming the streets in the dark after 10 pm and he hadn’t let her know he was going out.

 Seven tips if you allow your child to play Pokemon Go

I have played Pokemon Go with my children, and here are my 7 top tips for playing safely:

1. Set up the account on your own smartphone then you are in charge of when and where your child can play Pokemon Go. This will stop them being able to sneak out to play.

2. Say it’s a family account, and you decide whether to keep it going based on your child’s attitude to playing the game.

3. Make it a family walk – we have had some very successful treasure hunt bouts of Pokémon Go walking around our local city to collect Pokeballs and find Pokémon. They can tag along behind or in front, but go together.

4. Make sure to take an extra battery pack or two if you’re playing Pokémon go. Certainly, with the Apple iPhone, on which the batteries run out really fast. I played with my children this morning and after 20 minutes my battery had gone from 90% to 1%.

5. Quite often the Pokémon appear on roads. In the UK, most roads have pavements (sidewalks) so it is possible to catch the co-Pokémon from the pavement. It is really important that you make sure your child stays on the pavement and doesn’t go into the road to catch the Pokémon.

6. If you have a teenager do not let them play Pokémon Go in the car.

7. Make sure the in-app purchases are turned off the for the game as it can be very expensive. You can always continue to play for free.

 Should I let child play Pokémon Go without me?

I have allowed my older children to have short goes on Pokémon Go together, just a few minutes. However, I generally play with them. We live in Cambridge in the UK, which is a very pedestrian friendly city with lots of footpaths and green spaces. Furthermore, there are so many amazing local landmarks in Cambridge that going from Pokestop to Pokestop is like a local history lesson of the university town. Though, that said many of the Pokestops are pubs! As Cambridge is a safe, pedestrian and historically rich town have allowed my elder two children to play in the middle of the day in a busy and safe pedestrian zone for a short session. However, I made sure they had a backpack with water, suncream and my phone to play on so I could contact them and they could contact me. I also named some areas and Pokestops that they were not allowed to go to, e.g., the shopping centre or mall, no pubs and not the isolated public toilets. This meant we had planned their route before they set off with Google maps.

However, today we played at their grandparents’ house in the countryside of Lancashire. It is a very different experience here, and I wouldn’t let them play alone because the local geography is not as safe, in that you either walk down isolated footpaths and towpaths or onto isolated moorland. For this reason, I would only let them play in a rural area with me as it’s not an area they know well. I also wouldn’t be happy for them to roam around a big city with lots of heavy traffic as even sensible children find it hard not to be sidetracked by a game that is designed to sidetrack them with an overlay of augmented reality on top of the local geography and the local traffic and the local people. I have never played in a city, and my instinct would be to play as a family group and stick to safe, busy pedestrianised areas.

 Go with your instinct but learn about the game beforehand

In conclusion, as a parent who likes to limit my child’s screen time, I have enjoyed playing this video game which gets my children out and about with me on a treasure hunt looking for Pokémon. I particularly like the fact that if you find a Pokemon egg you need to walk a certain number of kilometres e.g. 2 km, 5 km, 10 km before the egg will hatch. This motivates the children to go on a long walk. That said I think there is a place for pure nature walks as well as games of Pokemon Go. Pokemon Go cannot and should not replace your child’s opportunity to play in nature, climb trees, paddle in a stream etc. but as far as video games go it has some fun aspects in that it encourages a treasure hunt outside.

At the end of the day, you need to go with your instinct. I have felt safe playing the game with my particular children in my particular safe and pedestrianised city on my phone. However, each parent, child and locale are different, and there are real concerns about letting your child play the game without understanding the game or the potential dangers.