Mandy Gurney

Former Director of the Sleep Clinic at the NHS St Charles hospital in London and Director of Millpond Sleep clinic. She also works as an NHS Sleep educator to health professionals across the UK.
{{ ellipsisText }}





Children have measurable problems that can be seen in class if they become sleep deprived. Teenagers need their sleep and studies have shown that sleep deprivation increased the risk of obesity (due to hormone imbalances) and decreased cognitive function reported as lower results in IQ tests.  Sleep patterns do change during adolescence, and these need to be understood to help support your teenager’s sleep.
 Video
 Article
 Forum 23
 Experts
 Products 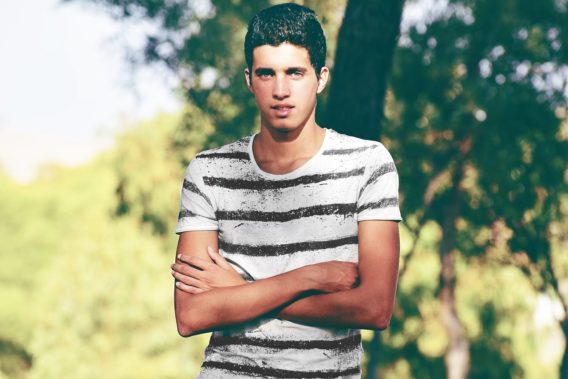  Studies have reported that children who have less sleep have bigger waists (which is associated with obesity).

 Children have lower cognitive function if they are deprived of an hour’s sleep (compared to a group of same-age children who had an extra hour of sleep).

All though this video talks about younger children the sleep hormones are the same in teenagers and respond to the same stimuli:

 Why does my teenager go to bed late and sleep in?

Sleep patterns go awry during adolescence. Many teenagers are wakeful late at night and play computer games long after the rest of the house has gone to bed and then they struggle to get out of bed in time for school. Their whole sleep pattern shifts hours later with late bedtimes and lie ins. However, there may be more to owlish teenager behaviour than just laziness and bad behaviour.

New research suggests that the hormones involved in puberty could be affecting teenagers’ sleep hormones.

The problem is that teenagers need more sleep than both adults and younger children. This is because while they sleep their pituitary gland releases growth hormone in pulses throughout the night that is essential for their growth spurt.

During sleep at night, blood pressure decreases (we are inactive and lying down which also decreases the need for a high blood pressure) heart rate falls, the immune system works to repair the body and we don’t produce urine or need to open our bowels. It’s the perfect time to grow and release the hormones of puberty.

When the sun rises, the body produces cortisol (called the stress hormone and secreted from the adrenal glands above the kidneys) and we wake up.

 What happens to your teenager’s sleep hormones during puberty

Melatonin is the ‘darkness hormone’ produced by the pineal gland (the third eye) in response to darkness and cool temperatures.

Adults start to produce melatonin around 10 pm. However, teenagers in a sleep study only began to produce the hormone at 1 am and then woke around 9-10am.

Part of the delay in melatonin production might be caused by teenagers today engaging in screen-based activities that suppress melatonin production. However, many researchers think that this shift in sleep timing may be adaptive, and teenagers need to be asleep in the early morning. When they stay up late, they often play computer games or watch television. This stimulates the brain and exposes the teenagers to bright lights which could cause the later release of melatonin.

However, sex hormones and growth hormones produced during puberty could be causing a later release of melatonin so that teenagers become owls rather than larks and need lie-ins and are unable to fall asleep early.

Indeed, a pilot study at Monkseaton High School in North Tyneside in the UK in 2009 allowed teenage students to start an hour later and this was associated with a 19% increase in core subject grades (e.g., English and mathematics).

Following on from this study a large four-year community study led by Professor Colin Espie at Oxford University will see over 100 schools starting at 10 am. This will help us understand the neurobiological and developmental implications of sleep to teenagers during puberty.

Scientists are beginning to understand how the hormones associated with sleep and hunger are related and have found that sleep-deprived children are more likely to gain weight around their waist than those children getting adequate sleep. Also, sleep experiments in Israel found that those children given an extra hour of sleep scored higher on IQ tests than the children in the study who lost an hour of sleep each night.

In the past, night time was dark and humans being day living mammals produced melatonin in response to darkness and decreasing temperatures and fell asleep until dawn. Nowadays, electric lights, tables, video games and heated bedrooms mean that this natural response to natural darkness has been disrupted and ‘wired’ teenagers do not produce melatonin at the beginning of the night as they are producing cortisol which leads to feelings of wakefulness.

Teenagers need to wind down for two hours before bedtime with low lights and no screentime (which emits blue lights which particularly suppress melatonin production). This increased darkness in the evening will help promote your teenager’s production of the sleep hormone melatonin and reduce production of the stress hormone cortisol (which prevents sleep).

 Help your teenager get their beauty sleep in 7 easy steps

Try these simple steps to support the optimal production of your teenage’s sleep hormones during the evening, night and morning.

Cortisol levels increase and melatonin levels reduce if blue light (in particular) enters your teenager’s eyes. This means he needs to stop looking at television and playing video games. So no staring at smartphones, tablets or computers for the two hours before bedtime. This is, of course, easier said than done but will help to reduce his cortisol and promote his melatonin production – the sleep hormone. Listening to music, listening to audiobooks and reading are much better wind down activities. Try to make sure your teenager finishes his homework earlier in the evening so that he is not finishing homework and looking at a computer screen the last thing at night.

A rarer problem with teenagers is early waking. If your teenager is waking early in the morning don’t try to let him go to bed later and later in the hope that he will sleep in longer. Instead, late nights and early mornings will mean your teenager will just be more sleep deprived, miss a sleep cycle and have increased cortisol levels. Instead, try to encourage him to wind down and have a bath or shower earlier as this will help lower his levels of cortisol in the evening and so help prolong him sleeping in the early hours of the morning. Even if your teenager doesn’t sleep immediately, it can still help listen to relaxing music or an audiobook in the dark or with subdued lighting. Try not to let him stay up in the bright areas of the house very late.

Try to reduce your teenager’s stress levels before bed; avoid arguments, stressful drama shows or loud music. Instead, try to help him choose calm and quiet activities in the evening. This helps to reduce cortisol levels.

Melatonin, the sleep hormone is increased by our bodies getting cooler (like they did at night when the sun went down in our prehistory). So encouraging your teenager to have a quick warm bath or shower for 5 minutes and then keep his bedroom cool, (only around 18 degrees). This will promote melatonin production in your teenager’s brain. He will tend to feel sleepy, less wakeful and will sleep better through the night.

It is also a good idea to keep the room dark and devoid flashing lights. Try to make sure that your teenager charges his phone, tablet, etc. in a public space rather than his bedroom. That way he won’t check each beeping noise and the flashing lights won’t disturb his sleep. Try to avoid having the WIFI hub in his room as it flashes all night. If the WIFI isn’t in your teenager’s room you will be also be able to turn it off and reduce internet use at night.

Melatonin is increased by darkness, for the same reason as Rule 4. So invest in gentle lights or a dimmer in your teenager’s bedroom so that he can have a calm space to wind down in. If he is in the living space in the evening, dim the lights an hour before your teenager goes go to bed (it’s good practice for you too). His body and brain will get the cue that night-time is approaching, and he will feel more ready to sleep.

If your teenager struggles to wind down and has anxious thoughts in the evening you could help him use a relaxation app or mindfulness meditation app to help contract and then relax each muscle in his body to help be in the moment and let go of any tension he might be holding in his body. Headspace is a great simple app for mindfulness.

These triggers and habits can all contribute to help your teenager’s body to feel tired and sleepy in the evening and wind down effectively.