Sprains on arms or legs

Babies and young children have weak joints so it’s not that uncommon for them to sprain their arm or leg. Be gentle as you hold them or swing them around in games.
 Video
 Article
 Forum 23
 Experts
 Products
Video Tutorial
In Short

Signs of a sprain:

 An inability or unwillingness to be touched, move or walk.

Babies and toddlers have weak muscles and joints with soft ligaments and tendons so it’s not uncommon for them to sprain their arm or leg. So every now and then they’ll trip over a toy or a chair leg and end up rolling an ankle or twisting a wrist. You need to be careful how your lift and play with your baby as – for example – swinging your toddler by the arms can cause a sprain or pulled arm. 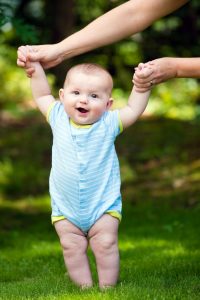  Signs of a sprain:
 What do I do if my baby or toddler has a serious sprain?

Sometimes it’s difficult to tell the difference between a bad sprain and a fracture because the symptoms are so similar. So it’s best to go to casualty or the ER if you are concerned that your baby or child has injured a limb badly and seems in pain.

 What do I do if my baby or toddler has a minor sprain?

Try to keep any weight off the area and keep the limb elevated if possible.

If you can get them to sit still for a little while (maybe go for a pram trip), you can apply a cold compress – either a bag of frozen peas wrapped in a clean tea towel, some wrapped up ice or a specially made cold compress from your first aid kit.

You can apply the cold compress for up to 10 minutes at a time (no longer and make sure no ice touches your child’s skin as you can cause an ice burn and damage the skin with direct application with ice).

Talk to your doctor about giving your baby or toddler some pain medication.

 How can I prevent sprains for my baby or toddler?
“Esme was downstairs in the bedroom and she was playing, doing something and she’d managed to crawl up onto something and she lost her balance and as she fell, I went to catch her and grabbed hold of what I thought was underneath her arm and didn’t and caught her forearm. And she seemed to be okay and then she sort of sat down on the floor and seemed to be very quiet and slumped like that and I thought ‘My God, what’s wrong’, you know, and I couldn’t work out, and I said
‘Are you okay? Are you okay?’ and she just sat there very quietly and said,
‘My arm hurts.’
But in that way that you know that children are sick when they are very quiet, it’s about pain and I tried to touch her arm and she was just in agony and I thought,
‘Oh my God, I’ve broken my own child’s arm!’
So I was distraught and I scooped her up and she didn’t want to go anywhere and she kept saying,
‘I’m sleepy.”
And I thought God, it’s the classic thing, you think, oh it’s a nightmare. So, it was winter, and I picked her up as best I could. I couldn’t put a coat on her or anything because her arm was in pain. I didn’t know what I’d done. So I wrapped her in a fleece, you know, one of my fleece jackets and I carried her down to the taxi rank here and took her straight to A and E.
And on the way there I was thinking,
‘Oh my God, they’re going to call social services. I’ve done something awful, you know, what’s going to happen and when I got there this really chirpy nurse said,
‘Oh it’s fine! It’s fine! It’s called pulled arm.’ It’s literally called pulled arm. It happens to most children and it usually happens when you child is standing by the side of the road and they’re about to run out and you go to stop them. And that’s when it happens for most people. And the other one is when you’re swinging your child between two parents, is the other way it can happen. And they explained that it’s to do with the way children’s bones are growing and so the joints, you know the ball and socket thing on shoulders and elbows aren’t sort of as strong as they are when they’re older and so just a very small pull, can pull the arm out. And so I took her and
I said,
‘well what happens, what do you do,’ and she says,
‘it’s fine,’ so she looked at Esme and she said very gently said,
‘I’m just going to press’ and she pressed and there was an audible click as it just sort of went.
And then Esme just sort of went,
‘Oh? Oh?’ and instantly was sort of sunny again from being quiet sort of soporific and slow and she went,
‘Oh it’s gone! I’m fine, I’m fine’ and that was it, we didn’t know further problems. But it’s quite scary because you don’t know what’s happened and you think you’ve done something terrible but it’s nice to know that it’s happened to most other people.”
 Rashan – Dad
“Around one, Dexter was starting to pull himself up and I was right there beside him. And he was playing away, just like normal, he often did this, where he fell over on his butt. And he fell over and fine backup playing and the rest of the day he was just sort of whiny and wanted his mama. And he just wasn’t himself. It took the whole day for me to realize that he wasn’t putting any weight on his ankle, and usually how he crawled, was he sort of tucked his leg in and pulled himself along and he wasn’t doing that either.
And sure enough he had gone over on his ankle and they thought he’d maybe broken something so we spent, I think it was the whole next day in emergency waiting for an x-ray. It turned out okay, they didn’t see anything, with time, with a couple of days, began to put weight back on it. But yeah, I was right there beside him and you, never know.”
 Joanna – Mum
Share the knowledge








NEXT LESSON
